In the final hours of my summer break, local crooks found the perfect way to symbolically mark its end. They stole my bike.

When I woke up yesterday to get to the IC to work on our back-to-school issue, I went out to my deck to eat a quick breakfast, and after a few minutes, the realization crept over me ”“ something was missing. It’s strange how you don’t immediately recognize when something isn’t there when it’s supposed to be, but I finally noticed my bike was no longer locked to the side of the deck.

I’ll now have to replace the almost-$300 investment. But, even though these petty thieves could steal my ride, they can’t rob me of the wealth of memories I’ve built sitting on that bicycle seat this summer.

I rode more this summer than I ever had before, and it is essentially what defined my summer break (along with preparation for the IC, a close friend’s wedding, and all the other typical summer things).

Two friends and I rode about 340 miles with from near Pittsburgh, PA to Washington DC during a week-long journey I’d recommend to anyone. We rode on two trails, which connect in Cumberland, Maryland.

We tried to ride way too fast the first few days, which eventually slowed us down because we had to stop so much. Finally, though, we learned that we could get so much farther without stopping if we just paced ourselves, and we got into a comfortable rhythm.

The scenery, especially in northern Maryland, was simply breathtaking. I don’t know what other adjective to use. The rolling countryside and impressive rock faces reminded me that we don’t need to travel across the ocean for gorgeous scenery. 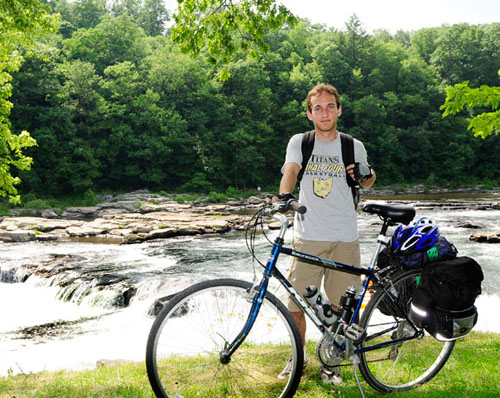 My beloved, lost bike and I at Ohiopyle State Park in Pennsylvania.

Even more impressive than the landscape was the sprit of the people. Our first day of riding was marked with torrential, spirit-crushing downpour. We rode as much as we could in the crappy weather, but we were falling well behind schedule. When we stopped near a house on the trail, though, the family inside insisted we take a break on their deck. The mom of the house brought us hot coffee, biscuits and gravy, and turkey. She was only the first example of this hospitality.

A few days later, a couple of campus cops paid for lodging fees for all three in our group, totaling about $30. A restaurant owner let us sleep on her property so we didn’t have to ride any farther late at night. And we met countless others who graciously offered their time and advice to us. The trip showed me what the best of people can be.

We met others on the trail with whom we became close friends. We leapfrogged one father-son team for most of the trail. They were riding to DC too. When one in our group got a flat tire, these two stopped and spent a half hour helping us repair the tire tube. We eventually met up with them in DC on the boardwalk of the Potomac River and then ate dinner with them before spending a few days touring our nation’s capital (it was my first time there). 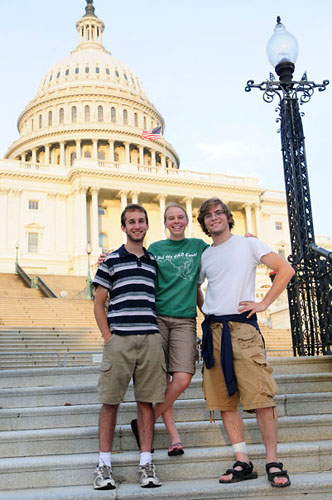 Me, Melissa, and Eric stand before the capitol building.

After that trip, I couldn’t shake the urge to ride farther than just around the neighborhood.

One Friday afternoon, I rode 60 miles from my doorstep up to Ann Arbor to visit my friend Angela. She had suggested I could stay the weekend and ride back on Monday.

The ride up there was at times boring. The endless country roads didn’t offer the same views as the trails form the DC trip did, and I realized as I rode what a difference it is to ride so far alone instead of in a group ”“ no one to motivate you, and no one to talk to. Plus the wind, as it always is on barren country roads, was sometimes unbearable.

As I finally saw the activity of Ann Arbor and got to ride around the University of Michigan campus, though, I felt really satisfied and was glad I did it.

I rode to Grand Rapids, OH on a couple occasions, once with my friend Davey and once with Josh. It was only a round trip of about 30 or 40 miles. We rode to the Mary Jane Thurston Park, where we could take in the view of one of the nicest parts of the Maumee River in our area. Then we walked through the old-fashioned town and ate at a nice, cheap restaurant overlooking the river, and then get some ice cream before making the return trip on country roads a bike trail (we took the Wabash Cannonball trail part of the way, which runs diagonally from Maumee toward Whitehouse and eventually to Indiana).

Beside these trips, though, I spent almost every other day on my bike this summer. I’ve formed three primary biker-friendly routes that could get me almost anywhere from my front door. For the first, I can go south to the Maumee River front and then ride along it until getting near the Wabash Cannonball trail, which could essentially get me to Indiana, Oak Openings, or Grand Rapids. I can go north on some less-trafficked roads to get up to the University Parks trial near UT, which can then lead me to my office or to Wildwood Park (or up to Sylvania, out of the city, and then to Ann Arbor). And I’ve yet to try the third, which would go up along River Road toward Maumee Bay State Park.

All this riding gave me time to think, while soaking up the sun and fresh air, and the experiences I’ve had while biking have reminded me of a few important truths in life (I’m sure you’ve heard them all before):

Often when riding, I would think to myself that my bike was the best $300 I had ever spent. I thought that bike would last forever.

While it’s hard to shake that materialistic, sentimental attachment to an object, at least I can comfort myself knowing that it’s something I can easily replace by going to the local bike shop. Besides, it gave me a way to start this blog entry, which I’ve been meaning to write for two months.